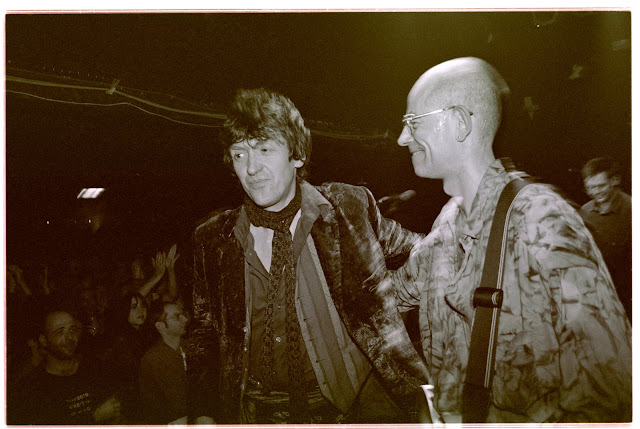 Nikki Sudden & Jowe Head at the Epic Soundtracks Tribute at London's The Garage 10th January 1998
In addition to his recently published (excellent) autobiography "The Last Bandit", Nikki seemed to be forever working on one written project or another - be it his history of The Wick, the house on Richmond Hill in London sold by actor John Mills to the Stones' Ronnie Wood, or one of several plays written for, but never taken up by, Radio 4 (including "The Bagman And The Twangman"). I have to admit though that I never saw much of the "Bring Back Ian McLagan" project which he mentions below. By far the biggest of these was "Albion Sunrise", his as yet unpublished novel. I'll post a couple of chapters over months to come, but, for now, here's his introduction.
"This book was begun in Berlin during January, February, March, April & May of 1997. On the computers of Brenda Parkerson & Britta Schenkel, and the lap-top that Melvin Reynolds was borrowing from a chap at Gloucester hospital. It was originally titled, Bagman’s Sundown, but I soon realised that was rather a final title. During those early months, like the first flush of a romance I wrote diligently and earnestly. As with a romance passion began to turn to weariness after time.


During June, 1997 I was on tour throughout Europe So little got done save for some emendation. Throughout July, August, September and October work continued on Biene Olbrich and Katja Klier’s computers—plus a brief spell in Paris on Freddy Lynxx’s machine. Back to Berlin for more work on Katja’s device. To all of the above go out many thanks.


In November of 1997 my brother, Epic Soundtracks, died. This necessitated a return to Albion for Christmas / New Year during which little was added to the book.


Then finally in January, 1998 I purchased my own machine and the book went gradually on. One chapter, “In Praise Of Miss Sundown,” was written during a flight from Berlin to Chicago. Various amendments followed during the next two months which were spent in exile in the Americas. Following on from my eventual return to European soil, work finally re-commenced in earnest. Or, so t’was hoped.


Work, when at last re-started went slowly. Tour followed tour and on the rare occasions I was in Berlin other matters occupied my mind. As is my way, I began work on another book, rather than continue with the one I should have been concentrating on. That book, Bring Back Ian McLagan, went on quite well and by Christmas / New Year 1998 / 99 was well underway. During that time I found myself once again in Blighty. Various books I was reading contributed to the reawakening of my interest in Albion Sunrise. One of them, strangely enough, was a travel book by a fellow named Bill Bryson whose reflections on my own country, though sometimes over-stated are very much along the same ways I choose to see England. It was Bryson’s mention of the Black Death in his book, Neither Here Nor There, which actually got me started again. It doesn’t actually take much to nudge me in any kind of direction, whether it’s the right one is another matter. Being in England I find myself surrounded by different books than I am in Berlin. Much of my library got moved oversea when I departed Albion’s shores at the end of 1996.


One of the reasons I wanted to move to Berlin, was because I felt, truly enough, that I could never write a book while still living in England. Sitting in my flat on the Reichenbergerstrasse one day I picked off my bookshelf an unread copy of John Pearson’s The Life Of Ian Fleming. In the book Fleming had said that he based James Bond on the person he’d always like to have been. That was it, now I knew how to go about writing my book, write about myself as the person I’d like to be. Thus was Albion Sunrise born. January 1999 I started writing once again. This book seems to surge forward in various kinds of swirls and flourishes—many times it veers off at great unnecessary tangents but by some strange twist these always seem to reach for their natural end—which by some rare kind of luck is my ending also."
﻿
"And if I say I loved you forever
You know I believe in what’s been said
But sometimes never means forever
Because my heart’s so easily led."*
* Basement Blues by Nikki Sudden, from the album “TEXAS” (Creation Records, 1986)
Posted by chris17 at 22:12 No comments: