The Rag Dolls by Chris Seventeen 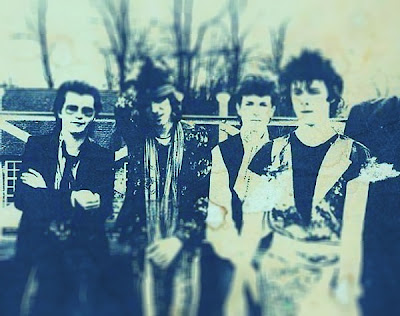 Time, I think, for something I wrote myself, and it's the first interview from the first ever issue of WANWTTS, with a band many of you may not be familiar with, though chances are you'll recognise many of the characters. Whilst the first line "The Rag Dolls have in them the potential to be truly massive" may not have been especially prophetic, to this day I stand by my view that they were a wonderful band with some exceptional songs, two of which we are proud to have included on records included with the magazine ("Sparrows" with issue 2 and "Lucky Smiles" with issue 3). There's a session recording for Midlands radio station Beacon (Carl Bevan where are you?) that would, with the original four track demo, make for a fine album and there are folk out there in a position to, and desperate to, release these songs, some 25 years after they were recorded.
So, as somebody else once said, now for the best band you never heard.
Introducing, From Birmingham, The Rag Dolls
The Rag Dolls have in them the potential to be massive. Of that there is little if any doubt: let us ignore the musical side for the moment and, as we lapse into the style of the Nationals, instead consider the all (too) important matter of image...on lead guitar we find Dave Cusworth, once, (unfavourably) described as being like “Keith Richards at his most wasted..”, a pretty untogether chap who, it is clear, lives only to play guitar; on lead vocals, Simon “Slim” Cartwright, contortionist and maniac extraordinaire, risking life and limb on dodgy stages and from wandering guitar necks; bass guitarist, once Mark Lemon, now Swami Prem Nigami, as he follows the “inner growth” beliefs of Rajneesh Bagwan Sri Rajneesh, and chooses only to wear pink, orange or red; on keyboards, the reet petit Paul Kane; and drumming Roy Orbison lookalike Carl Bevan. So that's more or less the look. Now on to the music.
Saturday 28th May, The Fighting Cocks, Moseley, Birmingham, and sound-check complete, we hesitantly retire to the lounge for our interview. Their first, with someone who knows little about them and this may not be particularly easy going. Seated round a table are Cusworth, Mark, Cusworth's wife Lesley, who is also their manager, group confidant Nikki Sudden (who the hell do you think you are?) and our pal Andy Bean. Standing over by the door, Robert Lloyd of the Nightingales, and on the adjoining table the remaining Rag Dolls talking with Andy Wickett, leader of The Xpertz and formerly of megastars Duran Duran. So that's the scene: Cusworth is quiet, Mark's prepared to talk, and Lesley helps out. 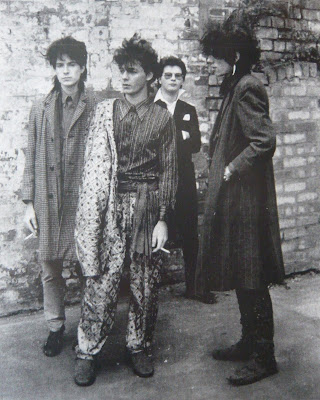 Together a few months now, they've played half a dozen or so gigs, mostly around their home city of Birmingham though they did venture down to London's 100 Club to support Glen Matlock's London Cowboys, as guests of Nikki Sudden. It was a pretty shambolic affair – I know as I was there. Cusworth: “We always seem to get into these dodgy situations when we're involved with Nikki”. They had glasses lobbed in their direction; “It was a punk night but no-one told us”. Yet the 100 Club was besieged with calls the next day from people anxious to find out who this band were. Back in November (1983) they recorded four tracks at Woodbine Studios in Leamington, and this demo evoked a positive response though as yet nod definite contract offers. Flicknife Records are interested but it's early days just yet. Towards the end of July, beginning of August, they're going back into Woodbine to record two tracks to “sell” to a record company as a ready made single.
Prior to The Rag Dolls, Cusworth was in The Hawks, who had a strong following around Birmingham and who released one single before splitting. Mark: “Birmingham's answer to the New York Dolls, or at least that's what I said in letters to record companies”. In fact The Hawks did appear on TV's “Look Hear” but despite this and a gig at The Marquee in London, they seemed unable to get to the right people. “You can play ten years in Birmingham without being noticed. Despite the success of Dexy's and Duran Duran, neither the major record companies nor the music papers come to, or have anyone based in Birmingham”.
Before calling themselves The Rag Dolls, they were The Bible Belt. Then long-time friend of Cusworth, young Nikki Sudden came along, and played with them as Six Hip Princes. They wanted to play his songs, without him singing, which he wasn't keen on, so he left them to it, though still played the odd gig with them. Former members of the group Mandy Darlington: “We asked her to leave because we didn't think she could sing though she has improved” and drummer Greg Twist are now with The Scarecrows who are about to sign to a major label. 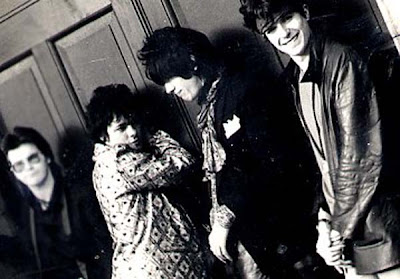 The Rag Dolls music has been described as “sixties-ish with something new and fresh as well” and while Mark likes this description, Cusworth disagrees with it almost as much as he disagrees with it being described as rock'n'roll, though we all agree this is back in vogue. Cusworth: “Everybody says we are a rock'n'roll band, but that's just classing us on our image and not the songs”. There are hundreds of original songs to choose the first single from, and Mark is momentarily tempted to do a version of the Jimmy Cliff song “You Can Get It If You Really Want It” but the others don't concur. Lesley: “Only the major labels release covers to get hits – even Bauhaus did their own songs before getting a minor hit with Telegram Sam and a bigger one with Ziggy”. So the single will probably be “All In Vain”.
None of the band have jobs. Mark: “Being on the dole, it makes me feel useful being in a band because people are getting some enjoyment from it”. Dave: “The only thing I can do is play, so I keep doing it”. When it comes down to influences, it's no surprise to hear they include the Rolling Stones, Bob Dylan and the New York Dolls. Dave, mockingly described by the others as a “creative genius” and “a stylist rather than a technician”, could be “the new Ron Wood if he played that badly”. The Rag Dolls as a whole could be something equally as interesting. They could be my new favourite band. They could even be yours. There's still room for improvement – drums sometimes a little basic and keyboards could be better used – but their greatest asset is undoubtedly the strength of their songs. I'll end with a request.....play “Sparrows”.
Chris Seventeen 1984
Posted by chris17 at 23:09