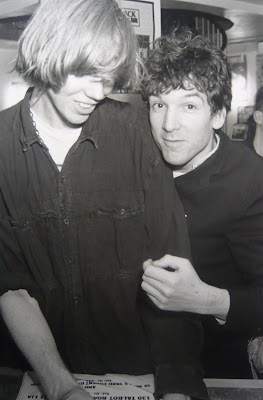 Thurston Moore & Epic Soundtracks
It seemed like a good idea at the time – Epic's suggestion that we include a Sonic Youth discography in the next issue of WANWTTS – so it was to be....
.....however, this being Epic, detail and completeness was inevitably the order of the day and so began his mammoth task of ensuring he achieved this ambitious aim. A list of releases running to some 15 pages was eventually forthcoming. What to do? Okay, another special issue beckoned. Photos of record sleeves were taken – covers perched on a chair in Epic's back garden and me trying to hold the camera steady – scanners were unheard of round these parts in 1987 – developed and cut to size. Our go to source for photos, Mr Marty Perez, supplied a bunch of SY pics – some reproduced here – and we were on our way. Easier said than done as, on what seemed like a daily basis, Epic kept providing updates and additions, so my cut and paste skills were continually tested to the max. So it never quite got to the printers and then WANWTTS passed away with somewhat of a whimper. I've still got the pages of text and, obviously, the band photos – long lost the cut out picture squares of record covers tough – and this wonderful intro by Epic that we were going to use. If there's anyone out there working on an SY discography, get in touch and I'll copy you Epic's labour of love. 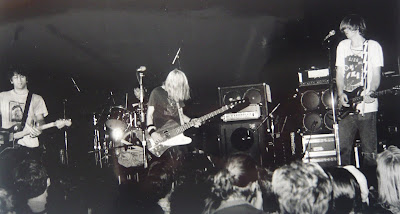 THE SONIC YOUTH TOTALLY RUIN BOSS DISCOGRAPHY TO END ALL OTHERS STONE DEAD by EPIC SOUNDTRACKS
Thanks be to Sonic Steve, Mirror Moore, Kim Dash and Infinity Lee for some info and various couches to sleep on. Also to Andrew Bean (the Keeper Of The Files) and Pat Naylor (B.F. Connection).

Hey Chris, last Sonic bullet I promise! On final leg of SY discog overkill. You know I put that stuff about the COACHMEN AND FLUCTS and stuff, well there's loads more, but find SY cover Forced Exposure Summer '85 'cause I'm not writing it all out. NO WAY! Last night, had this weird nightmare – I was listenin' to side four of METAL MACHINE MUSIC and fell asleep and left the record on all night. WOW, pretty heady stuff! There was this freaky guy in the dream who looked like a walkin' haystack – answered to the name of Mirror and he was swayin' in the breeze like a mad thing. I was still asleep and there was all this smoke in the room. The record player had caught fire. OH GOD! He started tellin' all about this record “Hey Epic, d'you know about my first single, came out in '72 on Dickweed Discs, by my High School band The Dudes. You got it in your discog?” “OH FUCK NO! I missed it out, too bad.” “Yeah, there was only 16 copies – it was pretty ruin – it was called “I OWN ONE SQUARE INCH OF HEAVEN”. After that we changed our name to The Duds, 'cause we kinda sucked around the mid '70's.”
So, hey Chris, too bad I missed it out. I'm pretty pissed off about it. I wanted the discog to be perfect in every way. FUCK. I used to really dig SY....now I can't stand 'em. Sold all the records. UGH!
Epic. 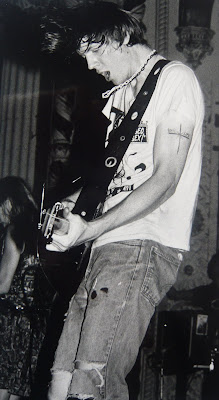 THURSTON - “In A Gadda Da Vida” - Iron Butterfly
STEVE - “Don't Shoot Me I'm Only The Piano Player” - Elton John
LEE – Johnny And The Moondogs' acetate
KIM - “You're Living All Over Me” by Dinosaur Jr
Posted by chris17 at 13:22