“...even when we had got big and had support groups, we had to get the supports to tune up for us because we couldn't!” 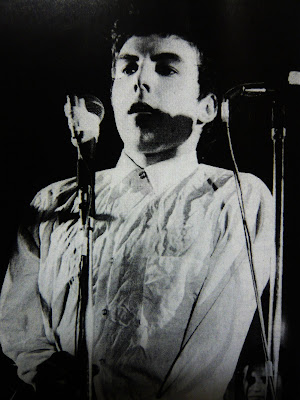 Vic Godard
In the mid to late '80's and early '90's, New Zealander David Swift was a regular writer for the New Musical Express as well as a valued contributor to our magazine. It was he who introduced me to the bands on New Zealand's Flying Nun Records most particularly The Chills, The DoubleHappys and The Sneaky Feelings – the latter two of whom appeared on the LP that accompanied issue 6. As well as writing for us an excellent introduction to New Zealand music, he also interviewed the very wonderful Vic Godard and wrote it up for issue 6 of WANWTTS back in 1986.
"Vic Godard is back, but only just.
The Absent-Minded Tuxedo has, so far this year, given us an LP, and even performed live. And for all we know, he's now gone back within himself for the rest of the decade. He's like that, is Vic.
“T.R.O.U.B.L.E.” was issued on Rough Trade a few months ago, a release that went by almost unheralded. The short version of the long story behind the album – a collection of swingin' Vic, including some of his oldest material “updated” - is that he recorded it two years ago for Blanco y Negro, but Warners' (Blanco's parent) weren't happy with it. It took a fair old time for the tapes to come into the possession of someone who could handle the record. Not that it's controversial, anything but, but we guess that no-one really wanted to know in 1986 (except Rough Trade, who made a critical killing out of the Subway Sect retrospective LP last year.) 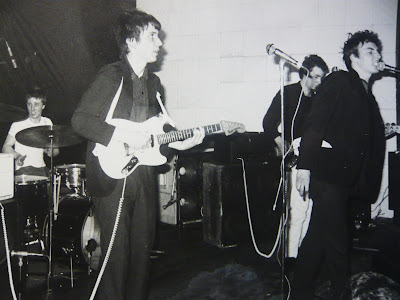 Subway Sect (Vic on the right)
Vic, who's spent the four years since the demise of the Subway Sect Mk. IV (or thereabouts) either dish washing, playing jazz (unannounced in Richmond pubs) or working in a bookies – depends what you read – wanted to promote “T.R.O.U.B.L.E.”. The current story is, and we risk litigation here, that Vic went to Rough Trade and asked the label for some money, to compensate for time away from his job at a Barnes bookies', said time to be spent playing to promote the record. Rough Trade handed over the cash and then, by chance, discovered some time later that Vic had been sacked from the bookmakers for incompetence a month previously! Maybe his relationship with Rough Trade will be temporary. His audience might also be temporary judging by the one show he's managed so far. At Bay 63 in Ladbroke Grove, London, Vic stood in front of his pick-up band of incompetent student jazzers and doled out sub-standard standards to a rapidly dwindling audience who'd been eager for their first sighting of him in years. He pulled out a packet of cigarettes fro one tux pocket, box of matches from the other, and lit up in his best Las Vegas manner; his manner was so absent, so disinterested, that it seemed to suggest that he, Vic, believed that he was in fact addressing the audience at Caesar's Palace. Make me sad, Vic.
A year previous I'd tracked him down to his mother's place in Barnes, south-west London. I'd brought along a copy of the Subway Sect retro to show him, for he claimed over the 'phone that he's not seen it. And sure enough, once he'd put me in the living room and produced the inevitable tea-pot (Vic's appetite for tea is well-known), he ran into the kitchen to show the LP to his mum. He seemed quite pleased that he was still remembered. The collection of essential rock'n'roll on the LP is of less consequence to him these days.
“I hate that” or “Can't listen to that now” are his usual verdicts on the prime cuts from the original Subway Sect. He doesn't rate “Ambition” at all, although he's not so glum as to refuse to praise “Stop That Girl” - “Easily the best thing I've ever done”.

After “T.R.O.U.B.L.E.” was recorded, Vic once again found himself in the hands of Bernie Rhodes, one time Sect and Clash manager. Rhodes decided to employ Godard as a full time song writer, to utilise those talents while the LP was shelved by Blanco y Negro.
“I was writing some really good songs, but nothing was happening to them. I found out that Bernie wanted me to be in a band again, an electronic band that he'd got together. It was really useless, a big joke. He got really annoyed with me for not taking it seriously, but, I mean, I HATE synthesisers. They even had a machine to work out bass lines!”
Bernie nicked his guitar when they parted company, said Vic. Nevertheless he's still got a big backlog of songs, although Vic is not the most “together” artist, so whether he is ever organised enough to record them is a matter of conjecture.
How does he rate the latest release compared to “Songs For Sale”, the 1982 set by the last Subway Sect?
“It's a jazz album by a jazz group, where “Songs For Sale” was a jazz album by a rock'n'roll group. There's some classy pop too; it's what “Songs For Sale” should have been. Most of the musicians were got together by studio where I recorded it....they're all professionals, they've done jingles and things. The accordion player was a Radio 2 regular."

Vic is particularly pleased with “Chain Smoking” on “T.R.O.U.B.L.E.” From the expert thrash of the original (see “Retrospective”), it's been stretched into a slow cig-holder drawl with back piano. Unrecognisable actually, and very neat. He's not afraid to re-do his oldest songs.
“Yeah, but a lot of it is by accident. Simon Booth (of Working Week, who produced the LP) said he'd always wanted to hear “Stop That Girl” done with a Latin backing, so we did.”
And that works too, although it's obviously a league or two behind the perfect ache of the original. Is he happy with his refinement of the crooning style he turned to in 1981?
“Yeah, I'm pleased, because doing jazz is a real progression after starting with punk. Like, the Clash were still churning out the same stuff they did years ago – I can't see the point in that. I don't hang around with anyone who's into modern music. The only people I know are those who like the things I like, Radio 2 and Frank Sinatra.”
At that recent show, however, Vic was alert enough to spot Douglas Hart of the Jesus And Mary Chain, and he made enquiries as to royalties from the Mary Chain's recent cover of “Ambition” on the flip of the “Never Understand” 12”.
“The only people who know me are the punk types” sighed Vic. He'd much rather see Vic Damone, or Perry Como, or Sinatra, attempt one of his songs than the Mary Chain.
“The songs I think would be good for covers on”Songs For Sale”, well, a couple of them, and a lot on this new album. I could just imagine Perry Como doing “Swing Gently” or Tony Bennett doing “Be Your Age” - Sara Vaughan too...but these people don't know me. If (sic) the album came out, maybe someone could go round and do some promotion, asking these people if they'd like to do the songs.”
While Sade goes multi-plat all over the world, Vic sits back and watches the world go by, happy enough it seems. He wasn't even aware of the recent dead-dog “jazz revival”, let alone sharp enough to cash in on it – a move which would have seemed just.
“I haven't heard much of that stuff. Sade sounds more like reggae to me. I like what she does, but I wouldn't call it jazz.”
He has deemed Working Week a little “way out”(!)
“I don't listen to modern music at all. The only time I hear it is when it comes on Radio 2. But judging by the TV, it definitely seems to be ten years ago. God, some of them...like that Dewran Dewran bloke, his voice is just so awful. Dunno how he got anywhere, the songs are just pathetic.”
Vic fondly remembers the days of the first Subway Sect on the White Riot tour;
“Fantastic. It was any idiot picking up a guitar; even when we got big and had support groups, we had to get the supports to tune up for us because we couldn't!”
June 1986. The album has dropped out of the indie charts. Vic hasn't been seen since the Bay 63 show. Right now, his mum's probably making his tea. A great talent, sitting at home, fluttering on the horses and listening to Radio 2. If anyone sees Vic Damone, tell him about Vic please."
David Swift

The occasionally reliable Wikipedia reports that Vic worked for a while too as a postman. He certainly got a bit busier in the 90's not least with his great "The End Of The Surrey People" album on Postcard which included the very wonderful "Johnny Thunders".


In 2007, as Subway Sect, Godard recorded the songs that were intended for the debut LP back in 1978, and released them as 1978 Now. The line-up includes original drummer Mark Laff and original bass player Paul Myers also features on some of the tracks.

2010 saw the release of the "We Come as Aliens" album under the name of Vic Godard & Subway Sect.
Finally, a track from issue 6 of the magazine, the aforementioned Sneaky Feelings from New Zealand with "Not To Take Sides".
Posted by chris17 at 00:47