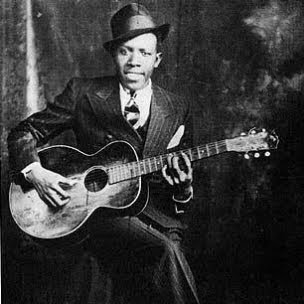 Robert Leroy Johnson 1911-1938
Nikki was more than just a contributor to the magazine - assistant editor it seemed at times and always an inspirational figure. A lot of what we did would not have got done without his constant chiding and encouragement and of course, it provided a virtually unrestricted platform for Nikki's many musical musings. This particular piece never appeared - it was lined up for issue 7 - and there are sections which, in light of his own unexpected and early demise, seem to have significantly added meaning. 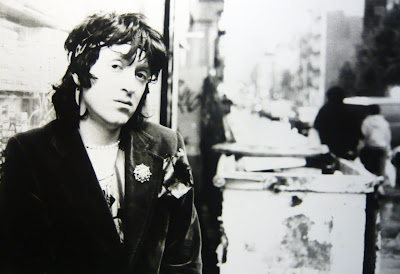 "The legend was there all the time. It was there long before we were born. The kid died at the crossroads – arms outstretched – poisoned by some lousy woman – some dead man – only 21 years old. You know how it was; a few good years, then go. Bury his body in a shallow grave. An unmarked grave. No tombstone, not even a black cross. Let him go back to the dust. Let his soul go down.
Everyone knew the rumours. Y'know, a few years ago that kid couldn't hardly play. He used to come along and watch the old guys swapping their licks, singing their tortured stories. Singing the blues. Once in a while he tried something himself, but he could never pull it off. He just hadn't got it.
Then he disappeared for a while. No one saw him. No one knew where he went. Then, when he came back, he knew more that all those old blues men – there was nothing he couldn't play, no depth of despair he couldn't plunge to.
And there was only one way that this boy could have done this. Everyone was agreed. He must have done this deal, crucified himself.
Sold his soul to the devil.
Yes, so maybe that's rubbish – but it's a good story. It's the story that the whole mythology of rock and roll is based on. Y'know, this music, the Devil's music. And who's going to prove otherwise?
It seems like the only way you're ever going to do anything worth doing these days (or any days), you're going to be cursed forever. You can put it down to jealousy, you can put it down to misunderstanding, you can put it down to fear (probably the strongest), but whatever you do, someone's going to resent it. And this is the web we all have to bear.
So what is it that equates a six string guitar with the Devil? And what, even, is this Devil? Some figment of life's tortured and tormented mind? It seems that everybody believes in some kind of devil, but this is natural, judging on the way things are. As night follows day, so evil must follow good. And as the blues and rock and roll came from the black man, they must be from the wrong side of the fence. All things evil, be they whiskey, heroin or sex, they all echo the sound of rock and roll. Do I believe this? Do I care...?
Yes.
I don't believe you can equate these things so easily. It's a drab covenant of sorts, this life. Respect the government, respect the church, respect this, respect that, but don't think about it too much. Stay silent and you will be blessed. Rebel, and you'll find yourself first pushed up against the wall, then through it. Knocked down. Soon even taxis won't stop for you. You'll end up dead. Ah, but you'll end up dead anyway. It's probably not worth really worrying about. And this is what I'm sure Robert Johnson knew about. It's sure as hell what Mozart knew about. It's what all the ghost heroes of your past knew. There's something hidden behind that door and you won't necessarily find it by being good. Pity, really... 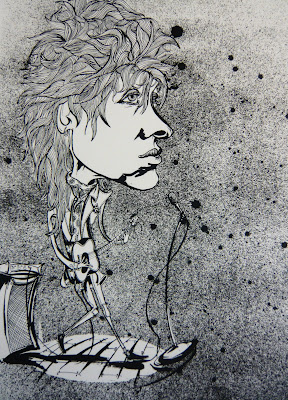 Nikki Sudden by DAV
So, it's back we go. Back to the coast of Ghana. Back to the Gold Coast. Back to the Mississippi Delta. Back to the Dartford Delta. Back to wherever you came from. This little kid only just born and already learning to cry. Learning that life's not what it's cracked up to be. Learning that there's only one way out of this purgatory, and that's to lie and to cheat, and to sweat and to burn. And least that's what it says in the Bible. In the Old Testament. And it's in the Old testament that everything that is the blues seems to come from. All those tales of redemption and sorrow. The trouble is you can't really believe in all that. Not all the time anyway. Still, that's what is drummed and drummed into our heads from as soon as we take that first breath. And I guess Robert Johnson was no different.
The kid from the Mississippi Delta – hitching his way round the southern states, playing for money, for a place to sleep, for a drink, for a woman. And whatever he had and however he got it, everyone knew he hadn't learned it. He knew too much. Yeah, everyone knew that boy had evil. You cold see it in his eyes. You could hear it in every smashed and broken chord he played, in every mutated syllable he uttered. And no, he wasn't shy, he was just afraid of letting people see too much of him in case they could tell what he'd done.
This Robert Johnson. This son of the parched and starved cotton soil. He'd sold his soul. It had to be that way. No other explanation of how he got to be that good. And his songs. His blues. He wrote about him and the Devil walking side by side. Only once place he'd end up. And soon. You could tell he had it coming to him. Hell hound on his trail – that boy shouldn't have messed around. He should have stayed home on the Robinsonville Plantation where he belonged. But, as Keith Richards once said, “...when people start telling you you're evil, it makes you start thinking about evil. It's just what you feel. Whether you've gotten that good and evil thing together. Left hand path, right hand path, how far do you want to go down?Once you start, there's no going back. Where they lead is another thing....”
So where does all this lead? Nowhere really. It takes you to the graveyard in the end, everyone goes there one day. And who wants to die with poison in their glass? With poison creeping through their body. Oh yes, maybe it's so romantic – hey, what's romantic about death? It's this dumb, stupid mythology that spreads itself like some corrupt, languid courtesan, all over rock and roll – all over the tombstones of our inheritance. Be it Cleopatra or Brian Jones, James Dean or Edie Sedgwick, Jimi Hendrix or Marie Antoinette – they probably didn't want it. “Woke up this mornin' and found myself dead...” Yeah, how romantic. How dumb. This is what we are brought up to believe though – and the trouble is, maybe it's inevitable.
But then Muddy Waters was still playing when he was 70, and he maybe saw Robert Johnson play once – or at least glimpsed him from the end of some jitterbug Clarksdale avenue – through the sawdust filled lamplight of a half derelict juke joint. And whatever he saw, whatever he heard, some of it rubbed off on Muddy. Some of it rubbed off on Chuck Berry, who'd hitched to Chicago just to see Muddy Waters play. And I guess Chuck Berry inspired a kid or two to dig a bit deeper. Maybe it is all true. Maybe you do have to sell yourself. But one day you're gonna have to pay the price. When the Devil comes knocking, ringing your front door bell...."
“I buried your heart at the crossroads
Where the milestones mark the way
And the dew fell across the stones
And marked the way to your grave.”
Nikki Sudden December 1986/January 1987 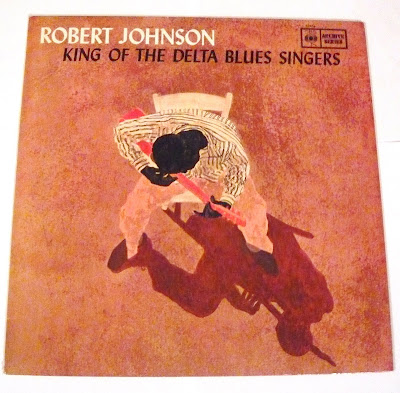 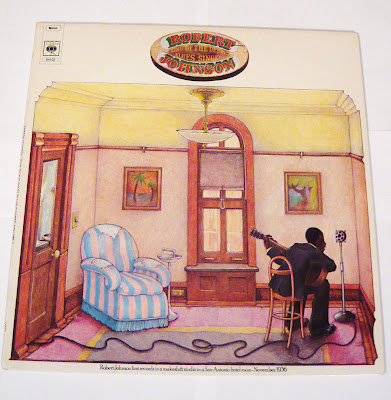 Recommended listening –
King Of The Delta Blues Singers
Vol 1 (above)
Vol 2 (right)
by Robert Johnson
(CBS Records)
(It's gotta be vinyl, I mean, blues on CD....
come on.....)
And from the sublime to the ridiculous.....
﻿
It's been a while since we had a musical addition to the blog. When you've listened to this (if you listen to it...) you may well feel you're still waiting for a musical addition.......
So, we called the magazine What A Nice Way To Turn Seventeen after a song by the Crystals, and then King Frog And His Frog Kings write (and record) a song called What A Nice Way To Turn Seventeen named after the magazine. A little ungraciously perhaps, we'd love to say we were proud of the tribute. Make up your own mind.
We can assure you there will be better musical offerings to come. We promise.
Posted by chris17 at 20:57