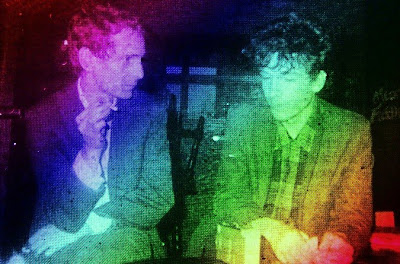 Alex and Epic, Mean Fiddler, October 16th 1985
Issue six of the magazine saw an amazing in-depth 6½ page interview with Alex Chilton by Epic Soundtracks. Its length means we're going to split it into two parts, the first covering Alex's life and career up until the non-release of the 3rd Big Star album.
It was October 16th 1985, and Epic and myself had just seen Alex and his band play at the Mean Fiddler and I sat in with Epic when the first part of the interview was conducted. Epic went solo for the second part of the interview carried out a few days later at the house in Brixton where Alex was staying.
PART ONE


When you were growing up in Memphis, was there a lot of music around – in the house and in the streets?
Well, for the first ten years of my life, we lived out in the suburbs. But my dad was a jazz player, and a lotta times I'd come home from school, y'know, and he and some of his friends would be in there jammin' out. My Dad played piano, and he had an electric guitar player. Y'know...bass, fiddle and a drummer in there. In the 30's he'd been travelling around as a musician and in about 1937, he got married to my Mom in Mississippi an' when they started havin' kids, he blew off music and got a real job an' steady money and stuff like that. But I was the youngest kid, and as I was growin' up, all the other kids were goin' off to college an' then getting' really gone, so he started playin' more music as I was growin' up.
By the time I was ten...man! It was party time around my parents' house, an' we moved into the inner city an' that was a pretty wild neighbourhood, with a lotta slum kids hangin' around and stuff. It was close to where Elvis had lived I guess...a real breeding ground for a lotta things. I remember countless nights of goin' to sleep with, like, 16 jazz musicians playin' downstairs.
Did you play any instruments at that stage?
I started singin' y'know...singin' along with Ray Charles and Chet Baker an' stuff like that. I guess when the Beatles came along my Dad bought me a guitar and I tried to learn to play but eventually gave up. When I was like 16 or 17 though, I started really playin' a lot and got pretty good, but still only sang on the Boxtops records.
Has soul music always been a big influence on you? That's the kind of stuff you were doing in the Boxtops in a way.
Well, then I had nothin' to do with the material, really. An' I really didn't care for it – I mean it wasn't really soul material, it was more this kinda white North Alabama mentality and middle aged at that.
Did you ever like any of the Boxtops records?
No...I think now that “I Met Her In Church” is the real high point production of the Boxtops career, y'know...
Do you like “The Sandman”?
Well, it was kinda....nice or somethin', y'know, but it's nothin' to me. I mean I don't listen to it or anythin'. But Soul Music, I mean the Memphis Sound was a real influence on me. When I heard Steve Cropper play, I said “Now that's what I wanna sound like!”
So the Boxtops were basically just manufactured by the producers?
Oh, absolutely, yeah...
Did you make any money from the Boxtops? I mean you had a couple of million sellers with them.
Well, when I quit, I had about $50,000 y'know, an' that lasted me until about 1976. But really it wasn't such a good deal – I should've had about $400,000 in the bank...but, well, I did have some bread, so I wasn't hurtin' I guess.
On the last 2 Boxtops LPs, there were some of your songs. Were you trying really hard to bring some of yourself into the group?
Well, yeah, but it was sorta impossible. When we had our first producer (Dan Penn) he was really strong on doin' things his way, but we blew him off after the third album, and this other guy Chips Moman came in, an' he was all for sorta encouragin' me, an' he always put a tune of mine on the B-side of whatever the single was. But the way they'd do it, was they'd give me the worst engineer, and give us an hour to finish the song...so it wasn't that good y'know.
How did the Boxtops end?
I was 18, almost 19 – nobody could tell me to go back to school – an' I was married too when I was about 18, for some strange reason (laughs). Anyway, New Year 1970 I left the group an' left my wife too!
I believe you went to New York immediately after that?
Yeah,,,,I didn't gig much though – I mean I might have gone an' sat in on a HooteNight...amateur night, sat down an' played a couple of tunes, but I was real scared. It was the first time I'd ever really tried to sing and play guitar together, and sometimes I'd shake so bad I just couldn't play the guitar at all. Most of all, really, I just hung around, met a lotta people an' musicians, an' learned a lotta things. Like the guy I learned “Alligator Man” from, John Harold, a great country musician. Anyway, I'd been talking to Chris Bell, an' he'd been talkin' about startin' a group, so I went back to Memphis to do that. 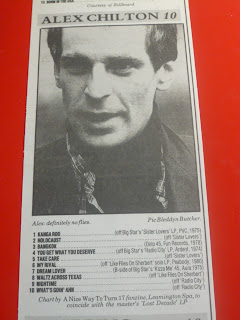 In 1986, the New Musical Express printed our Alex Chilton Top 10
It was really his group then, and you joined it?
Yeah, right.
You made some solo recordings before that though, in '70/'71. Is that so?
Yeah, an' some of that stuff is actually gonna come out now, on this new double album that New Rose is fixin' up (“Lost Decade”).
What would you say were the biggest influences on Big Star?
Well, Chris an' the others were really into British music, an' I liked that too.
I was going to ask you about that – some of the music sounds very Kinks/John Lennon influenced, and there's also later things like T Rex in there.
Oh yeah,....actually, we played “Jeepster” around a year ago in our set in New Orleans, an'people really went for it.
When Big Star's records came out, how shocked were you that they didn't do anything?
Oh, not too shocked. You see, the distribution was real bad. The label Ardent had a big promotion staff an' they did great things, an' got a lot of radio play an' stuff, but our distributor, Stax, could never get the records into the stores.
Big Star were in many ways a pretty commercial band....
Well, yeah, but Led Zeppelin and all those bands that went in to those 10 minute solos, an' what's his name....Alvin Lee, y'know, people like that were the big things around in those days.
Yes, Big Star's music, especially on the first two LPs was very concise. There were no pyrotechnics and jamming and so on...
Yeah, we used to say “Hey Chris (laughs) let's get jammin'!” and he'd go “Bleeeeagh!”
On “Radio City” especially, the songs sound very simple on the surface, but underneath are really intricate in their structure.
Yeah, nobody ever plays them right that tries to figure them out.
(Someone asks “What are the chords to “Daisy Glaze”?”)
Oh, it's a long story...it would take an hour!
Moving on to the third Big Star album, “Sister Lovers”. Over how long a period was that recorded?
Well, maybe three or four months.
When you started out doing that record, did the group still have a deal? Did you think the album would still come out at the end of it?
Well, I don't know, at that time, I was getting' pretty crazy, an' into some pretty rotten drugs. An' drinkin' a lot, an' I just wasn't thinkin' in any practical terms at all.
Do you think your state of mind really affected the way that the music turned out on that record?
Yeah, I think that the songs are mostly half written, the words.
And what do you think of the record now?
Well, I still enjoy a lot of it.
If you'd recorded, say, “Kanga Roo” on your own, as opposed to with Jim Dickinson, do you think it would have been much different?
Oh, I don't think it would have been nearly so good. I wouldn't have taken so many liberties. But now, after watchin' him do it, I can do it too, y'know? I learned a lot about producin' crazy soundin' stuff from him.
The general atmosphere and tension in that song is incredible. How did it all come about?
Well, the feedback was my idea, but Jim made it somethin' else altogether. He did the drummin' too – the whole thing's really advanced.
Did you hear This Mortal Coil's cover of that?
Yeah, and I didn't think much to it. I don't think you could top the original.
Is there anything unreleased from the “Sister Lover” sessions?
I don't think so...wait a minute though, there must've been somethin' sittin' around that didn't go all the way. Oh yeah, there's a version of me singin' this old song “Nature Boy” that Nat King Cole did. I listened to that recently, but it's kinda borderline. You can hear the musicians getting' lost with the tune. I considered using it on this album of unreleased things that New Rose are gonna put out, but I decided against it, especially after hearing Nico sing “My Funny Valentine” recently – she does such a great version of that.

So when you finished the 3rd album, you weren't too surprised at it not being released?
Well, in those days I had enough money to do what I wanted anyway, so it didn't affect me materially that they sold well or not.
But to me, that record contains some of your greatest music. When you finished it, and you released what you had just recorded, like this incredibly original music that didn't sound like anything else....did it not even affect you that no-one would hear it?
Um, I don't know. After having the first 2 Big Star albums go pretty much unbought, well I don't know. Somewhere along the line I figured out that if you only press up 100 copies of a record, then eventually it will find its way to the 100 people in the world who want it the most It's just like every time one breathes....if people wanna know about it around the world, then they'll know.
So you weren't affected by not having the acclaim?
Well, we were getting' a lot of good press and so we did have acclaim in that area I guess.
After all these years, does it still bother you that you're still pretty much a cult figure?
Well, the only thing that bothers me is that I like to make some money off a record.
Are you in a position where you can live off playing music?
Yeah, barely, very barely. I don't own a TV, I don't have a telephone, 'cause I can't afford those things.
Was there a time after the 3rd album's non-appearance that you felt like just packing it all in?
No I never considered that.

END OF PART ONE
And, to finish, here's a treat. Epic recorded a version of the Monkees "I Wanna Be Free" with Max Edie (Lizard) on vocals and Jim Dickson on guitar. It was lined up for WANWTTS #7 which, we've established (....) never came out. It is lovely.